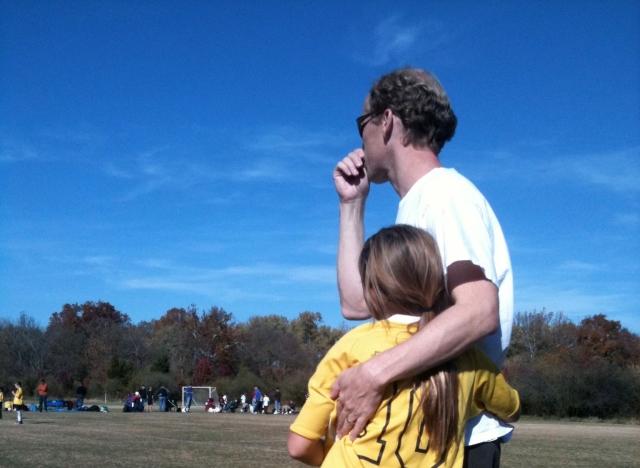 It finally fully dawned on me this week that my days as a soccer coach are done. On the one hand, this is odd, since I haven’t actually coached a game in years. On the other hand, it’s pretty typically human: we all tend to cling to ways of thinking about ourselves that we like, and I always liked myself as “Coach Steve.”

As is always the case when you’re teaching, I learned at least as much from the girls as they ever did from me. I learned how they could be tough as nails and still tender teammates. I learned how they could be heartbroken one minute and hungry for ice cream the next. Perhaps most importantly, I learned the importance of saying “yes, you can!”–when you’re trying something new; when you’ve fallen behind; when you start to think “but what if I’m not as good as …”

I hope my players learned that last lesson, too. I also hope they learned a few other lessons from our time together. Among them:

Life is too short to sit on the sidelines or to put in a half effort. Run as hard as you can every time you take the field, and look for ways to make each moment meaningful.

When you win or accomplish a goal, take time to celebrate. When times are tough, hold onto your teammates. And if it all becomes too much of a trudge, take a break–or even find another game. If what you’re doing makes you miserable, there’s really no way to win at it.

2. Win the ball in front of you

Don’t worry about the last mistake  you made or the chances that may come later. Focus on the ball that’s in front of you now. No matter how much time is left, no matter what the score is, no matter what the other team is doing, you can only really control one thing: how you go after that ball.

3. Be gracious in both victory and defeat

There’s nothing wrong with celebrating victories or mourning defeats. But no one likes braggarts or whiners. And what goes around eventually comes around–including graciousness.

4. Listen to your coaches, not your critics

Coaches make mistakes just like everyone else, but they know the game and have your best interests at heart. And that makes their feedback incredibly valuable. If you want to keep learning and growing–whatever you choose to do in life–continue to seek out coaches. They may be called “teachers” or “mentors” or “friends” or even “bosses,” but you’ll recognize them by the sort of advice they provide. It will typically begin with “yes, you can!”

That’s it for today’s pep talk. Now, get back in the game, no matter which game you play. Go hard! Have fun!

One thought on “4 Final Pointers from Coach Steve”