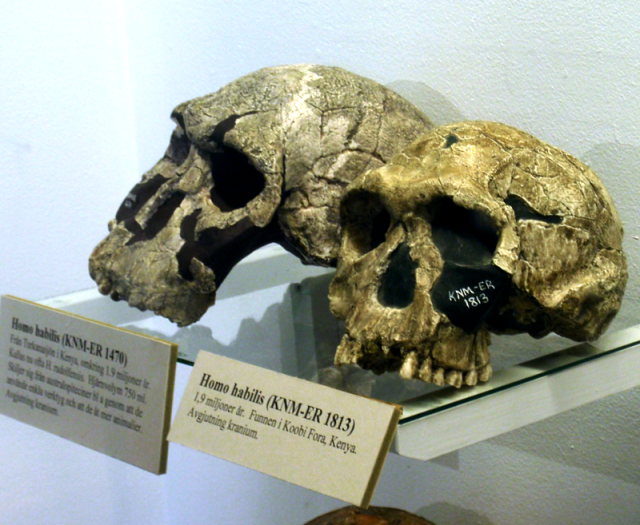 Some say the awe-inspiring complexity of the human body reveals an “intelligent design.” Others say it reveals billions of years of genetic mutation and natural selection—eons of evolution. Whatever you believe, it’s worth knowing the basic story scientists tell about where we came from.

The experts disagree on plenty. But most agree that humans evolved in something like these four steps.

The DNA structures of humans and chimps still look alike. Of the 3 billion base units of DNA in each of the species’ genomes, more than 98 percent are the same. Such similarity has led at least one influential writer to call us the “third chimpanzee,” along with bonobos and common chimps. By some genetic measures, we’re more similar to chimpanzees than chimpanzees are to gorillas. We’re also closer to chimpanzees than two species of gibbon are to each other.

Evolution works very slowly, so the original hominid species would have looked a lot like the other ape species hanging around Africa at the time—except that, unlike some of them, it stood up and walked on two feet. Over millions of years, multiple bipedal and more or less “apelike” hominid species evolved from this progenitor in a process that biologists call “adaptive radiation.”

Adaptive radiation produces “bushes” of related species within the larger tree of life, each adapted to a different ecological niche. Natural selection then “prunes” the bushes back, leaving alive only the species best adapted to current conditions in the competitive environment. In the case of our ancestors, scientists say, the radiating species were basically adaptive variations on the theme “bipedal ape.”

About 2.5 million years ago, the adaptive radiation of hominid species led to the evolution of a larger- brained hominid, Homo habilis (“man the handyman”). Importantly, the evolution of Homo habilis coincides with the appearance of the earliest stone tools yet discovered. Most experts agree that by the time we’re dealing with larger-brained tool users, we’re dealing with a “human,” or Homo, species. Still, Homo habilis wasn’t human in the same way we are. While his handyman brain was much larger than the brains of earlier hominids, it was only half as large as yours or mine.

Two more Homo species then arrived on the scene: Homo rudolfensis, a species like Homo habilis but with a bigger body, and Homo ergaster, a species with a bigger brain and better tools. All three Homo species likely lived in Africa at this time, along with two or more other hominid species. Crowds like that suggest that older, more linear models of human evolution are way too simplistic. Rather than one hominid species replacing another, many likely existed at the same time—and even competed for scarce resources.

About 1.8 to 1.5 million years ago, scientists say another new Homo species evolved, probably from Homo ergaster. Called Homo erectus, the big-brained brutes left the confines of Africa and spread across Asia—and thrived liked no Homo species had ever thrived before. Some fossils suggest that Homo erectus still lived in Asia as recently as 30,000 years ago. Another probable Homo ergaster offshoot, Homo heidelbergensis, which some scientists lump together with Homo erectus, later left Africa for Europe.

Scientists argue over whether modern Homo sapiens evolved from these early conquerors or whether we evolved from a species that remained in Africa—and then fanned out and conquered the earlier conquerors. Little is certain here. Experts argue about whether particular fossils belong to Homo erectus, Homo heidelbergensis, or even Homo neanderthalensis, the Neanderthal Man, who appeared about 230,000 years ago and lasted until about 30,000 years ago, long after the arrival of modern Homo sapiens.

Scientists say that arrival—the arrival of fully modern human beings—happened less than 200,000 years ago. Apparently well adapted, Homo sapiens spread across the globe and rapidly replaced all similar species. By around 30,000 years ago, Homo sapiens were the sole remaining human species (except for maybe Homo floresiensis, the hobbit-like hominids whose bones were recently found on the Indonesian island of Flores). Before long, humans were growing crops, building civilizations, and writing down questions about where we came from—questions we argue over still.

Want to learn more?
Click here to see the Smithsonian’s version of the human family tree